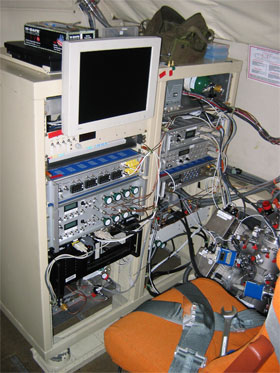 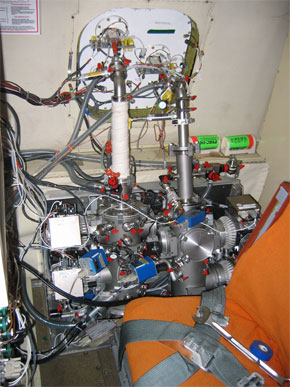 Chemical Ionization Mass Spectroscopy (CIMS), a technique used to detect small quantities of certain molecules, applies a radioactive source to the sample to be measured. The source is selected based on its reactivity with the particular molecule to be detected and only reacts with a few different types of molecules, giving them a charge (ionizing). An oppositely charged plate is then used to pull these molecules into the mass spectrometer. Only the charged molecules end up in the mass spectrometer, so only the desired molecules are detected. This allows very sensitive measurements of trace compounds.

Scientists at several large government labs and universities utilize CIMS-style instrumentation powered by DAQFactory to detect trace molecules in the air. One of their primary requirements for the DAQFactory software is to control the mass spectrometer, selecting which particular mass will be measured. Each of a selected number of masses is measured for a precise amount of time, often as short as 30ms, and from these numbers, the scientists can calculate the concentration.

The scientists at one institution first tried this process using LabView and a combination of five different National Instruments boards to perform the timing of the hops and synchronized readings. After a year of struggling, they switched to DAQFactory, which was able to perform the task entirely with software triggering and timing. It eliminated the need for the extra boards and dropped the total required to two - a multifunction DAQ board and the National Instruments 80 mhz counter. Scientists at other labs, seeing the success that the scientists had with DAQFactory, quickly followed their lead.

DAQFactory's CIMS driver allowed the scientists to spend varying amounts of time at each mass, set delay times with each hop to allow for the mass spectrometer to settle, and switch easily between the mass hopping mode and a normal scan across all masses. All these parameters could be changed easily and quickly by simply setting a variable in the software. With each hop, DAQFactory would record the total amount of time spent at a particular mass with sub-microsecond precision and return precise measurements of the concentrations of the desired molecules, without the need for hardware-timed acquisition.

Once the data were acquired, the scientists were able to utilize all the other features of DAQFactory to calculate the concentrations and display them on user-definable screens in real time, set up calibration loops and system monitoring sequences, and acquire housekeeping data from other devices. DAQFactory and the CIMS driver saved the scientists thousands of dollars just in data acquisition hardware, while still providing them with precise data and a very flexible, easy-to-use system.